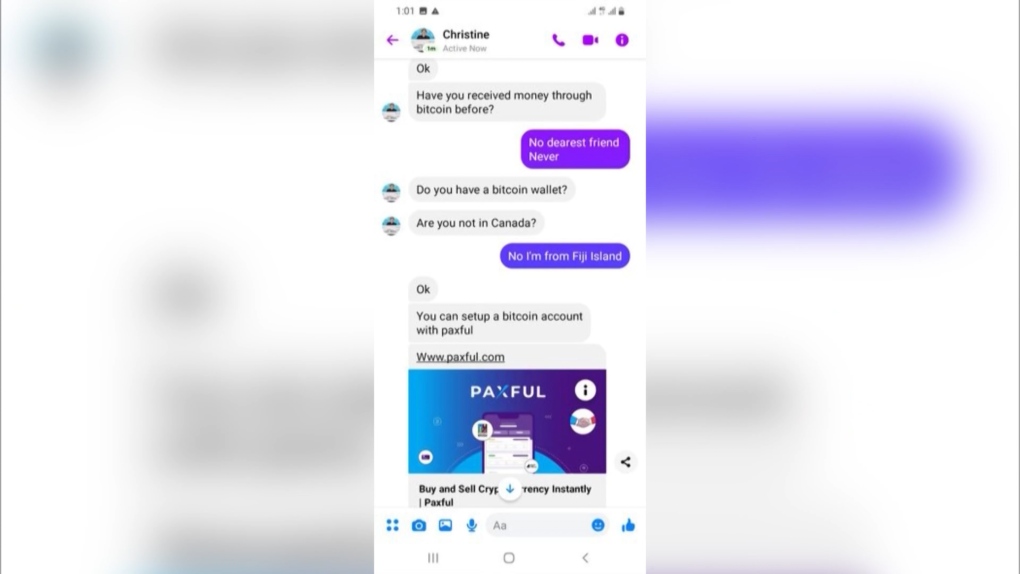 A CTV News investigation into a Facebook page claiming to belong to the winner of the biggest lottery prize ever awarded in British Columbia led to the suspension of the account and connected a needy woman halfway around the world with a generous Canadian who was genuinely willing to help.

A Facebook page in Lauzon’s name appeared soon after and began posting promises of free money to anyone who could demonstrate the need.

When CTV News became aware of the page and contacted the BC Lottery Corporation, the agency contacted Lauzon, who confirmed that the account using his name and photo was fake.

“I voluntarily decided to help people financially,” said a post on the impostor’s page.

A woman in Fiji, whom CTV News is not identifying to protect her privacy, responded to the message asking for $1,000 to fix her roof.

“When it rains heavily, water always enters the house. Like half the house, it goes inside,” the woman said in a video call from her home.

The would-be scammer actually offered to send the woman $100,000, but only if she first deposited $300 into a Bitcoin wallet.

The potential victim was trying to raise funds when she was contacted by CTV News and alerted that the Facebook page and generous offer were not legitimate.

“I was really happy because no one had ever offered me this amount of money before,” she said, describing how she felt when she thought she would receive the life-changing gift. .

“It is unfortunate that someone has targeted an individual in this way,” BCLC said in a statement.

“BCLC cares deeply about our players and we encourage them to contact us if they have any questions or concerns. In the event of suspected criminal activity, we advise them to contact the police.

“Thank you for reaching out. After reviewing this account, we have removed it for violating our Community Standards for misrepresentation,” Facebook said in a statement.

Travis Shawcross, CEO of Ontario healthcare company Pioneer Health Care, saw the CTV News story about the attempted scam and wanted to do something about the potential victim in Fiji who still didn’t have the money for home repairs.

“I said, ‘Well, you know, it’s a thousand dollars. If it’s going to fix her roof and she’s going to be happy, I’ll be more than happy to do it. So that’s what I did,” Shawcross said.

The woman says she will invest the money in improvements to her house that will keep rainwater out.

“He helped me. He already sent me the money. A thousand dollars to help rebuild my house,” she said. “And I’m so happy and happy for Mr. Travis’ help .”

When asked why he decided to be so generous with a complete stranger halfway around the world, Shawcross said he could understand the feeling of needing a little help.

“I had nothing before. I know what it’s like to have nothing. In 2005 I was in a shelter in Surrey. I lived there for a month because I had nothing and was trying to get back on my feet,” he said. “Through all the decisions I’ve made over the past 18 years, I’ve had great success. I have been so blessed and now it is time for me to give back.

His generosity restored a stranger’s confidence in the kindness of Canadians.