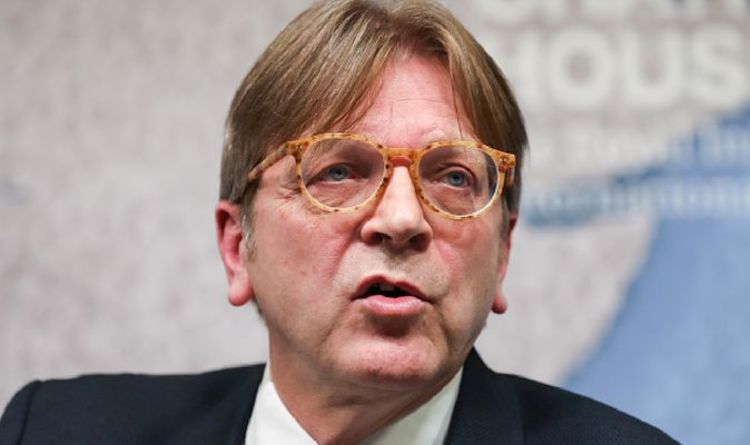 The Prime Minister said his government planned to “firmly replant the British flag on the world stage” after outlining its vision for harnessing the opportunities of Brexit.

Boris Johnson, in his foreword to the UK Government’s paper The Benefits Of Brexit, said the “bolder” the UK is in targeting the opportunities offered by leaving the European Union, the more “the gains will be great for all of us”.

The document was released on Monday to mark the second anniversary of Britain’s divorce from Brussels, setting out the plan for changes to Brussels laws that will be kept or scrapped, including an ambition to save £1billion for the companies by cutting off the red inherited from the EU. ribbon.

Reacting to the news, Belgian MEP Guy Verhofstadt said: “A Brexit cost paper would be much longer and more specific!

“If EU economic policies are so bad, why are almost all of the UK’s ‘new’ trade deals copied and pasted from the EU?”

A user called Michael replied: ‘There was a time when people like you suggested no one would want to trade with the UK.

Twitter user Andrew also said: “If the EU is so big, why are you so obsessed with us?”

And another user called Simon added: “Canada has been improved. Singapore has a technology agreement.

A fourth called Simon Ranger pointed out: “Man, those were our offers too.

“What’s the point of paying a membership fee to your club for things we can do ourselves?”

“That’s the purpose of Brexit. Why should we use a middleman?”

The 102-page Cabinet Office document also outlines the five-step approach to crafting new UK-specific post-Brexit regulations, pledging to “use our newfound freedom to act quickly and with agility” to to create “better markets”.

Other changes, including digitizing business documents and streamlining sourcing rules, are proposed in a bid to save UK businesses billions of pounds.

Mr Johnson said Brexit’s exit from the bloc on January 31, 2020 marked ‘not the last page of history, but the start of a whole new chapter’.

He predicted a “future in which we do not sit passively outside the European Union, but seize the incredible opportunities our freedom presents and use them to build back better than ever – making our businesses more competitive and our citizens more prosperous. “.

DO NOT MISS :
SNP’s Ian Blackford doubles Johnson’s attack after he was sent off [INSIGHT]
Brexit LIVE: ‘Major headaches’ as France triggers delay chaos at Dover [LIVE BLOG]
Dominic Raab erupts on partygate ‘You can’t have it both ways Kay!’ [VIDEO]

The Prime Minister continued: “Unraveling 40 years of EU membership, keeping what works, changing what doesn’t, supporting new industries, reinvigorating old ones and once again planting the British flag firmly on the world stage.

“This is an extremely exciting time for our country, a time filled with potential and opportunity. The bolder we are, the greater the gains for all of us.”

The publication of the document comes after Downing Street announced that it would introduce a “Brexit Freedoms” bill to facilitate the amendment of outdated EU law – a goal which is elaborated in the guidance document.

The bill will affect the treatment of retained EU law – regulations made in Brussels that have been retained in the UK’s compendium of laws for legal continuity after the end of the Brexit transition period in 2020.

With primary legislation currently required to change even minor details of the retained body of law, No 10 argued it would take “several years” to amend or remove outdated rules.

Rather, the reformed plan is to allow the “acquis” of laws to be amended through secondary legislation to enable “agile regulation”. Critics say the change will help dilute parliamentary oversight of ministers’ changes to the rules.

Speaking to broadcasters in Essex on Monday, the Prime Minister said that while the UK is not deviating from EU rules ‘for fun’, the legislation will help secure investment in advanced technologies.

“There are things we can do differently and we are thinking in a way that will encourage businesses to invest even more,” the Prime Minister told broadcasters during a visit to Tilbury Docks.

“In all areas where the UK is strong – cyber, artificial intelligence, all the cutting-edge technologies of the future – we will make sure we do things differently and better where necessary.”