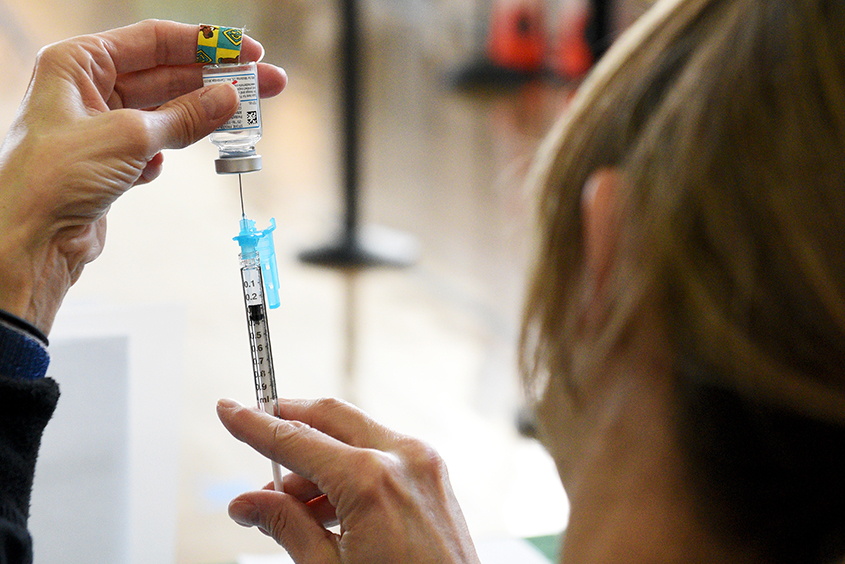 Counties in the region have reached new heights on COVID; the state doubles the masks, the tests, the shots

ALBANY – Although the state government is stepping up current countermeasures, it currently has no lockdown plan as a massive spike in COVID cases looms in the new year.

“We are breaking records every day,” Gov. Kathy Hochul said Friday morning, after announcing that 76,555 new infections had been confirmed on Thursday and that the count of COVID-positive patients in New York hospitals had reached 7,919, an increase of 7.4% compared to Wednesday.

A month earlier, as the fast-spreading omicron variant had just emerged and Hochul discussed preparations for a winter peak, 3,022 people were hospitalized statewide with the virus and the one-day record. for new infections was 19,942.

With new infections at a rate well above expectations from a month ago, Hochul on Friday unveiled Winter Surge 2.0, its updated plan to fight the virus.

It is essentially an expanded and improved vaccination, testing and masking campaign, without a stay-at-home order for New Yorkers or a shutdown order for businesses and public places.

State Health Commissioner Dr Mary Bassett said on Friday there remained hope that the omicron variant responsible for the current outbreak will peak and decline relatively quickly, with a lower percentage of infections resulting in hospitalization or death. This is the omicron model followed in South Africa, where it was first observed.

Hochul has taken parents to task on vaccination: Only 28% of New York City children aged 5 to 11 have received at least one injection of the COVID vaccine, compared to 95% of adults.

“Parents, I asked you during this [school] break to get them out on one of the many sites, ”she told Friday’s press conference. “These numbers are expected to climb much higher.”

These kits are an important part of the strategy to keep children in school amid the pandemic outbreak: if one of their classmates tests positive, a child can be given a test kit to take home. , rather than automatically entering quarantine. If they are negative, they can go back to school.

Many school districts say they haven’t seen any of the millions of kits Hochul promised.

The Schenectady Town School District on its website says it has not received any of the test kits. But Schenectady, most of the other school districts and Hochul herself, say the plan is for the children to be back on site for class on Monday morning.

The local impact of this latest wave of COVID has varied: some counties in the capital region, especially the larger ones, are close to or have exceeded record levels of infections. Smaller counties, especially those in the eastern Mohawk Valley, were lower than their previous highs.

All are doing better than New York, where the push has been concentrated.

McCoy said 1,003 new infections had been confirmed in the county population as of Thursday, more than double the one-day high, set earlier this week.

“You don’t go numb. You start to be shocked and alarmed, ”he said.

And 1,003 isn’t even a full tally, McCoy said: “It doesn’t include COVID test kits, the ones you buy at the supermarket.”

“We are starting to see what we planned, which is an exponential spread. This is probably due to omicron.

She asked the public to look elsewhere for tests unless they are seriously ill.

“We are currently overwhelmed in our emergency departments with patients arriving with very mild symptoms or some without symptoms requesting a COVID test,” she said.

“Our emergency services are really for the sickest patients. … We really want to be able to make this resource available to patients who absolutely need it.

Here are some local statistics as of Thursday, as reported by the state Department of Health on Friday:

As a measure of the pandemic, the seven-day moving average is considered a better measure than the one-day total because it alleviates anomalies such as the Christmas holidays.

Here is the daily number of new infections per 100,000 population and the seven-day average percentage of positive tests in some counties and regions:

2022-01-01
Previous Post: Steady growth in sales and margins makes Thermo Fisher Scientific shares attractive – Trefis
Next Post: How to change the layout of your HUD