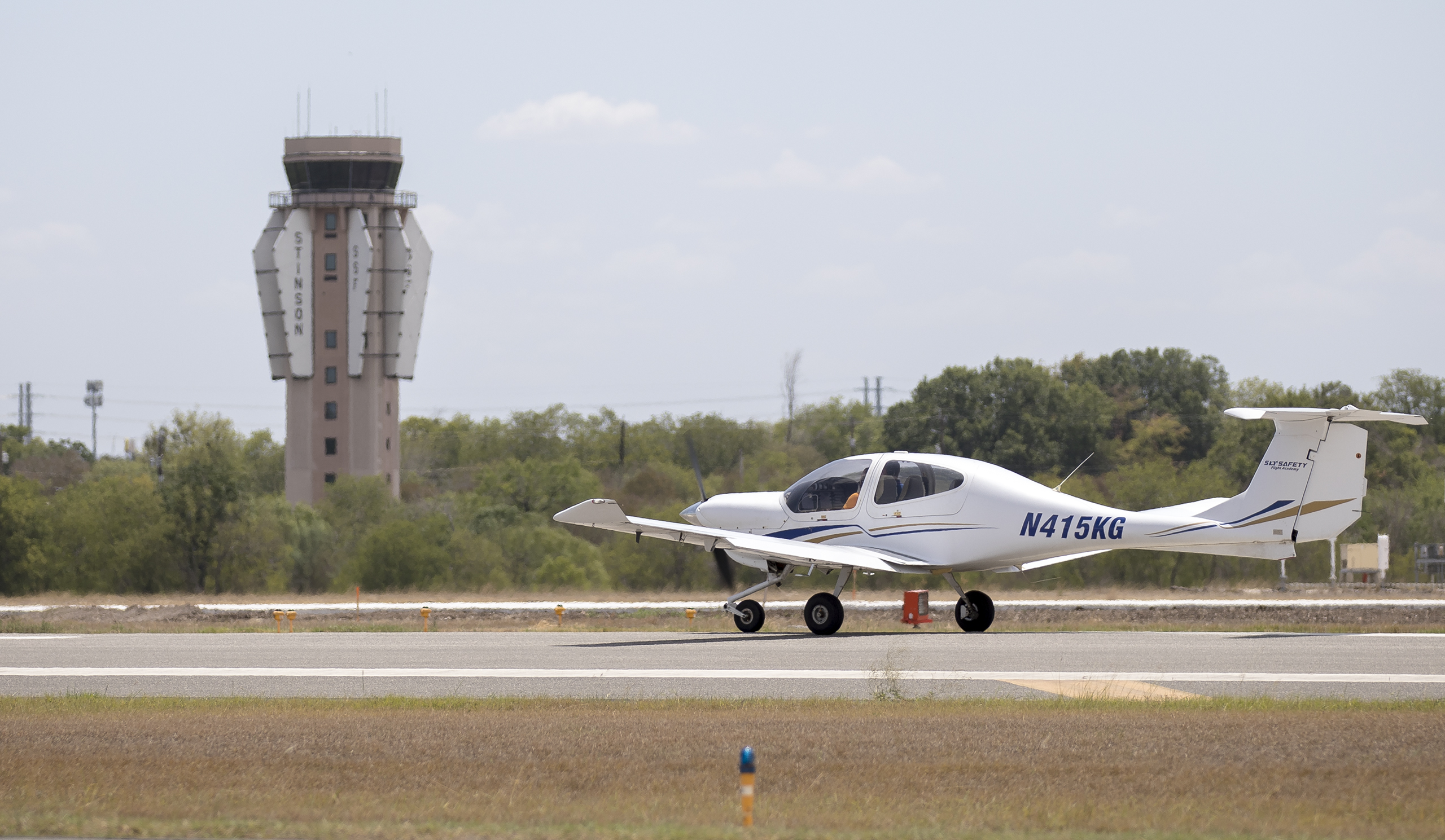 When the Stinson family leased hundreds of acres of South Side farmland to open a pilot school in 1916, the annual rent they paid the city of San Antonio was $5.

More than a century later, Stinson Municipal Airport remains the second oldest continuously operating airport in the United States. It averages about 100,000 takeoffs and landings a year, and in 2021 contributed nearly half a million dollars to the city’s aviation department’s bottom line.

Stinson has a much longer history than its commercial counterpart and has played a significant role in aviation history. Now, future plans for Stinson are being considered by the Texas Department of Transportation (TxDOT) and the city’s Department of Aviation.

Stinson got its start as a flying school, opened in 1916 by the Stinson family, including siblings Marjorie, Katherine and Eddie, and their mother Emma. They trained many World War I fighter pilots at Fort Sam Houston and later at Stinson Field.

In 1918, Stinson became the city’s civilian airport. It was renamed in 1927 in honor of a local journalist, Bill Windburn, who died in a plane crash.

In the 1930s, the airport served commercial airlines from its new terminal, built with funds from the Works Progress Administration. Stinson Airport also reverted to its original name in 1936. During World War II, the facility again served as an Army Air Corps training site.

In 1942, San Antonio reestablished its civilian airport on the North Side, and commercial airlines also moved to what was once known as Alamo Field, and is now San Antonio International Airport.

Stinson, with airport code SSF, remained in operation and in 2008 underwent a major capital improvement project to expand the airport terminal by 24,000 square feet.

In 2013, an update to the master plan led to the construction of a new air traffic control tower at Stinson, wayfinding signage, hiking and biking trails, and other projects beautification in the region.

Meanwhile, the San Antonio airport is in flux. In November 2021, City Council approved a $1 billion strategic development plan that will overhaul the SAT over the next 20 years.

Stinson will not be outdone. Four months ago, the Department of Aviation, which oversees all operations at both San Antonio Airport and Stinson, embarked on an airport layout planning process to the smallest airfield. He also circulated a survey to gather public feedback on what people would like to see at the airport.

Stinson is “incredibly important” as a relief airport, said Jesus Saenz, director of airports for the city of San Antonio. Stinson’s flight training schools and fixed operators are good for the entire general aviation community, he added. “Long term, as San Antonio continues to grow, so will Stinson and SAT,” Saenz said.

In collaboration with TxDOT, Garver airport consultant is developing an inventory of assets at the 107-year-old airport, said Stinson Airport Manager Morris Martin.

Stinson Airport now has two 100-foot-wide asphalt runways and 13 hangars that are fully occupied by tenant-owned aircraft, Martin said. Completed in 2019, the new air traffic control tower improved the view issues the airport had with the previous tower from the 1950s.

Changing this requires careful study and approval from the Federal Aviation Administration (FAA), but it could probably be one of the upcoming improvements at Stinson, even if the process takes time.

“It’s a lot of back and forth with the FAA and the different entities here,” Martin said, especially since Stinson shares airspace with military installations like Lackland and Randolph and neighbors the National Historic Park. San Antonio missions.

“These are all things you need to look at when considering improving approaches,” he said. “You don’t want to encroach on other people’s airspace, you don’t want to fly directly over missions.”

Airport officials also plan to build more hangars and a stormwater control project in the northern part of the airport where there is room for expansion, Martin said. “This will help us in our future development in this area.”

Former helicopter pilot and Vietnam War veteran Jim Martinson acquired two hangars in Stinson 14 years ago and went into business leasing the space to plane owners. Since then, Martinson and his son Jimmy Martinson have built two more sheds and added another. All are fully leased to private aircraft owners.

The Martinsons considered expanding the company, Ocotillo Aviation, to other regional airports in the state, including Austin. But aviation hangars require ongoing attention, he explained, and Stinson’s proximity makes that job more manageable.

Stinson is a good place to do business, Martinson said. “I think we attract our fair share of air traffic [nicely].” He also appreciates that Stinson is well cared for.

One change he would like to see is the addition of a U.S. Customs and Border Protection office to the airport, which would make it a more convenient destination for customers traveling to San Antonio from outside the country.

Already, a $1.5 million parallel taxiway is under construction at Stinson, which will improve safety and allow for further development of the airport to the north. It should be completed within six to eight months.

“The type of companies that would enter [newly developed areas] would be corporate-type aircraft owners,” Martin said. It would also provide space for fixed-base operators to build a facility large enough for large aircraft, such as corporate jets.

Stinson has an annual operating budget of $800,000. The taxiway project was partially funded with funds from federal pandemic-related stimulus bills, Martin said, but the majority of funding for Stinson’s improvements comes from TxDOT and the Capital Improvements Budget. of the airport.

A full report incorporating the results of Stinson’s public inquiry, airport inventory and recommendations for improvement is expected in about six months.

“We are delighted to publish [the airport layout plan] similar to what we did with SAT,” Saenz said, “to ensure that Stinson continues to grow and provide the support and economic effect that it provides to all of our [general aviation] operations here in and around the San Antonio area.

2022-08-22
Previous Post: Where to Watch and Stream Narrow Margin for Free Online
Next Post: Patrick Mahomes Skin Lands In The Item Shop