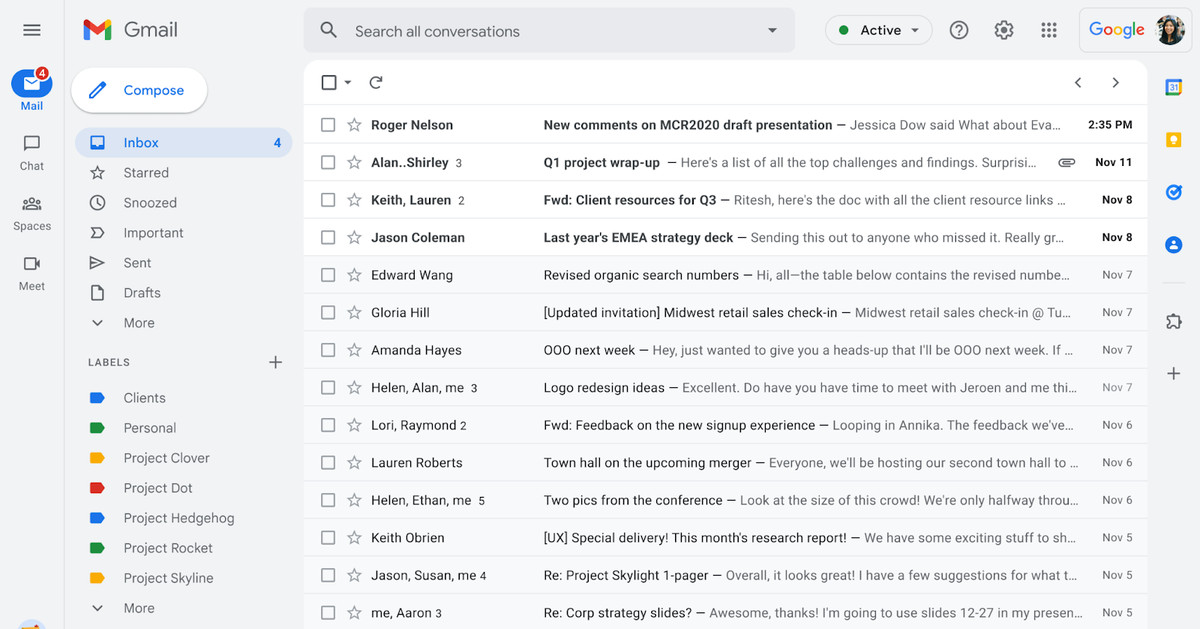 google announced that the new Gmail layout, which changes the way Google Chat, Meet and Spaces are integrated, will be available to try from February; become default in April; and become the only option by the end of the second quarter of 2022. The view ensures that Google’s other messaging tools, which are part of (but not necessarily limited to) its enterprise-focused Workspace suite, will not are more than little windows floating next to your emails, but get their own screens within Gmail which are accessible with large buttons on the left side.

Google calls this the built-in view, and you’ll soon know whether you (or your employer) are a Workspace customer or personally use Chat and Meet. Starting February 8, Google says you can start testing the layout for yourself. By April, anyone who hasn’t signed up (Google shows there will be a prompt at some point encouraging you to do so), will be switched to the new layout, but can come back within settings. This option will disappear by the end of the second quarter, according to Google, when the new layout becomes “the standard experience for Gmail”.

The new view could be polarizing – while managing chats and meetings can be a little confusing in Gmail’s current layout, it’s all on one screen, which is nice if you like data density. But for those looking to focus on one thing at a time, the new interface seems to give you easy access to other tools without always having them on screen. There will however be ways to access your chats from the messaging screen – a Google support page describing the new layout mentions that new notifications will appear as a bubble in the left corner of the screen and you can create a mini popup in the interface that you can use to respond.

The company says there will also be bubble notification to let you know if other tools need your attention, which might be less distracting than, say, having a list of all your Chats alive. left or right of your emails.

Google has shown it wants to deeply integrate all of its work-related products, and this layout gives us a taste of what that could look like, with tools like Spaces letting you jump into a spreadsheet without leaving Gmail. . Although it looks like you’re already able to, as Google says when describing the new view, “easily switch between your inbox, important conversations, and join meetings without having to switch between tabs or open a new window”, it’s probably fair to say that this all seems a bit tacky. Google’s screenshots of the new layout give the impression that the new interface will be more put together.

Services will also be more integrated – Gmail’s search, for example, will also show chat messages in the coming months, according to the company (similar to how Hangouts messages were also searchable from Gmail).

Google says this new layout will come to everyone who uses Google Chat. According to Google spokesperson Amanda Lam, “the new integrated view is aimed at users who use multiple apps. By the end of the year, this means that users would get this experience if they opted for Google Chat. or Google Meet.

Updated February 3, 2:55 p.m. ET: Updated with information that Google has decided that the layout will be accessible to anyone who uses Chat Remember, instead of limiting it to a specific type of customer as originally advertised.