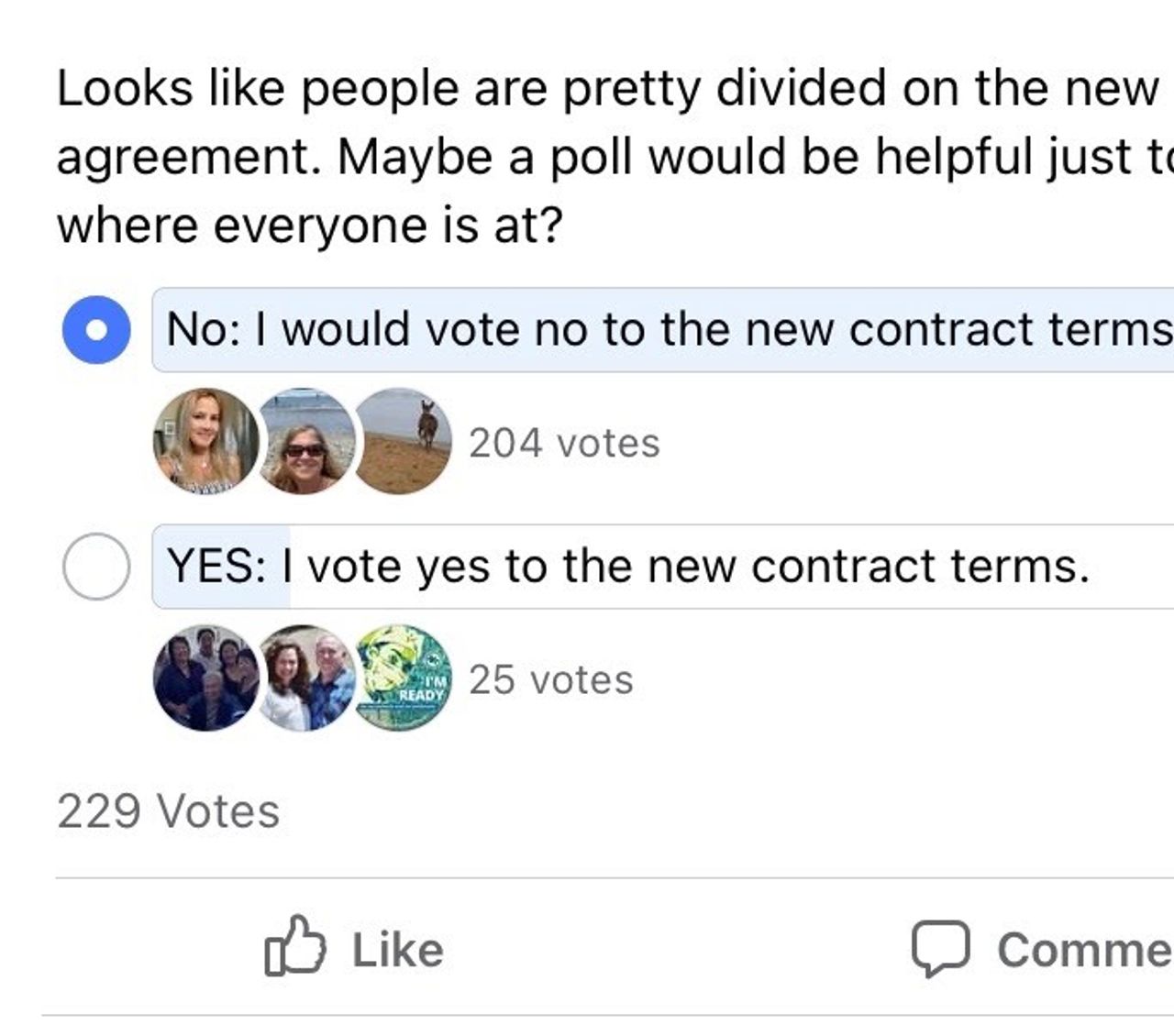 Join the grassroots committee of Kaiser workers and fight for safe staff and adequate resources to fight COVID-19! Contact the committee by email at [email protected] or by SMS (213) 419-0737. Your name and contact details will not be shared publicly.

Skepticism is brewing among healthcare workers over the margin of victory the unions claimed for a new contract covering more than 50,000 Kaiser Permanente workers. The four-year deal, which contains below-inflation pay increases and commits unions to helping management cut costs further, was declared ratified Thursday morning after two days of online voting.

The voting process was deliberately opaque, and workers who spoke to the WSWS were unsure how the vote would be calculated at the national level. However, a later statement from the Alliance of Health Care Unions, the umbrella organization that brings together most of Kaiser’s unions and negotiated the deal, said that although the deal was reached at the level of the Alliance, effective ratification would take place individually at each union.

This means that if the result were split between different unions, with some voting to ratify and others to reject it, the unions that voted to accept the deal would go to work under the new contract, isolating the unions that voted to accept the deal. voted against the agreement. This blatantly undemocratic method is designed to divide and defeat opposition among the grassroots and to punish workers who voted against the deal and called a strike with the prospect of being left to fend for themselves on the picket line.

This is what can happen with the 1,600 members of the United Pharmacists of Southern California (UPSC), the only union to have rejected local and national agreements.

The margin of victory for the contract in other unions, despite strong vocal opposition to the deal ahead of the vote, raised eyebrows for many Kaiser workers. According to a union Facebook post, 70 percent of workers at the United Nurses Associations of California / Union of Health Care Professionals (UNAC / UHCP), which make up more than 60 percent of total AHCU membership, voted to approve the contract. Five of the unions affiliated with UNAC / UHCP, he said, approved the contract more than 90 percent. Incredibly, he also claimed that members of United Pharmacists Hawaii, which has several hundred members, unanimously approved the deal. The total votes have not been made public.

UNAC / UHCP Executive Vice President Charmaine Morales said: “This is a historic moment for our union, for all Kaiser employees and for healthcare workers across the country. She added, “We have shown what is possible when you come together to defend the highest professional standards and the highest quality patient care. In fact, the contract does nothing to ensure secure staffing, but creates another staffing committee, while funneling tens of thousands of dollars into the Alliance’s Labor-Management Partnership. On the day the contract was announced and workers’ disbelief announced, Morales posted on social media about his getaway to his cabin in the snow.

A nurse told the WSWS: “The Vice President of UNAC just posted that she is having a good time right now in her beautiful cabin in Big Bear… Ridiculous. I wouldn’t publish anything at all if I were a union leader.

Many workers expressed shock at the news that the agreement was adopted, citing that they knew very few colleagues who supported the agreement. The WSWS saw a recent poll on the UNAC San Diego Facebook page that found the vote was going in an entirely different direction, with 204 workers voting against out of 229 and only 25 voting for.

A Southern California surgical nurse told the WSWS that in her hospital, the vast majority said they would vote NO: “95% of us were against it. The consensus was that it was not a good deal. There are a lot of questions. We all have the impression that they were not transparent in their numbers.

He also noted that he and his colleagues suspected that the UNAC / UHCP announcement arrived at 12:17 a.m. Thursday morning, just 17 minutes after the polling stations officially closed, noting that it appeared that the announcement had been prepared before the count: “They already had their flyer typed and their email ready to send.

With reference to the contract, he noted: “Already [the unions’ initial demand of 4 percent wage increases at the start of talks], it seemed incredibly low, especially considering inflation. Deere got more than 10 percent. Now it’s all life [of the contract], 10 percent, over four years. We have always had a three-year contract, and now we can no longer strike in unison. Everyone understands that is why they did this. Many technicians are worried that their contracts will expire this year or next year. They fear being fooled, saying that if this happened to us they would get something even worse.

“Many of us were deployed to other departments during the pandemic. We’ve had to do things we’re not comfortable with. The union said “that’s the way it is, do it”. After the past two years, we should have had more weight than ever before to ask for more. “

Regardless of the outcome of the vote, the process itself made a mockery of democracy. The unions announced the deal, which fell short of demands from nurses and even the much more modest public goals of the unions themselves, when they called off a strike of 32,000 workers in Southern California that had been allowed by a 96% margin. Throughout the run-up to the vote, unions have unleashed censorship on social media, removing opposition posts from their pages and banning opposition nurses.

From the start, their goal was not to convince nurses and healthcare workers to support the contract but to convince them that nothing could be done to stop it. Indeed, there is no reason to believe that even if the vote had been 70% against the agreement rather than in its favor, the union would have yielded to popular pressure. In one fight after another, from John Deere to the Ingalls shipyard workers to members of the IATSE film crew, the unions defied the “no” votes to “ratify” contracts anyway through an anti-democratic clause in their constitutions, or by forcing workers to vote over and over again on the same deal.

The cancellation of the November 15 strike also further isolated Kaiser’s 700 engineers represented by the International Union of Operating Engineers (IUOE) who have been starving on the picket line for more than two months with strike pay rate down by IUOE. as the winter holidays approach. The 24-hour sympathy strikes by CNA and SEIU management were nothing but a set-up as union officials before and since have ordered workers to cross picket lines.

Kaiser’s workers, however, can’t wait another four years to stage the next fight. Already, the surge in coronavirus cases, which will almost certainly be significantly worsened by the hyper-infectious variant of Omicron, threatens to overwhelm US hospitals again, making nurses fight for safe staffing ratios and adequate resources for a lifetime of public health. and the issue of death not only for themselves and their patients, but for the entire working class, who are sent to dangerous workplaces to work and risk infection and death in the name of corporate profit.

A new independent leadership is emerging among the Kaiser workers themselves, in the form of the Kaiser Workers Core Committee. The formation of the committee during this struggle was a significant step forward in mobilizing opposition to union betrayals and in calling for the broadest support within the working class for Kaiser’s healthcare workers. .

Sign up for the WSWS newsletter for healthcare workers!