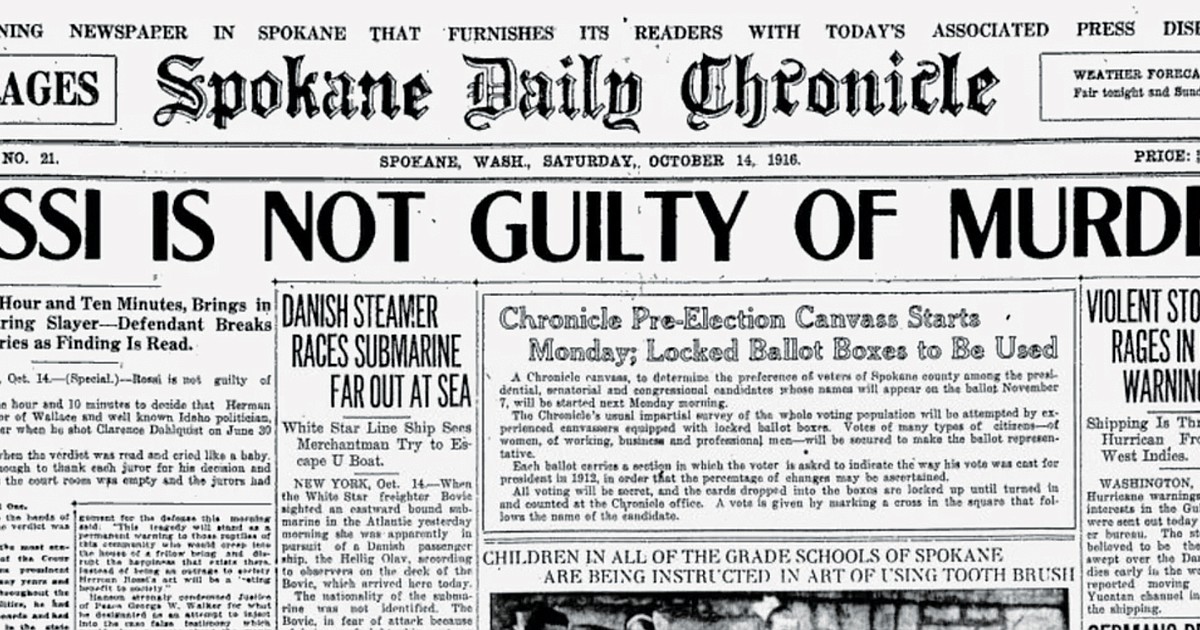 You won’t find “The Rossi Murder and the Unwritten Law in Wallace, Idaho in 1916” on the New York Times bestseller list.

But Ron Roizen’s book should be on every Northern Idaho history buff’s must-read list.

The 366-page tome details the 1916 murder of a young rival by former Wallace mayor Herman Rossi. As of March 4, the first anniversary of the date of publication, Wallace outlets had sold 300 copies, not a large number but one that pleases author Roizen. After all, his adopted town has only 800 inhabitants.

“Far from disappointing,” said Ron, “this result so far is actually very gratifying.”

In November 1997, Ron moved to Wallace from Berkeley, California with his wife, Maggie, and daughter, Alexis. The dedication to his book shows that he has settled in well: “For Wallace, my adopted city.

Ron’s interest in Rossi began with a visit to Nine Mile Cemetery, north of Wallace, where he spotted Rossi’s grave near the entrance. Later he heard the rumor that Rossi’s important resting place was separated from the main cemetery because he was considered a murderer by some.

His interest in Rossi was ignited while helping a friend research the history of the former Samuels Hotel, the site of the infamous shooting.

Herman Rossi was a prominent Wallace businessman who would serve five terms as mayor. In 1906, after the death of his first wife, he married Mabel Price in a ceremony at St. Thomas Church in Coeur d’Alene. He was 36 years old. She was 21. The marriage would hamper Rossi’s political ambitions.

Mabel was an alcoholic. Rossi viewed her condition as a disease and sought treatment for her. But on June 30, 1916, he returned from Boise to find his wife had spent a boozy weekend in bed with a young lover, Clarence “Gabe” Dahlquist.

Enraged, Rossi drove to the Samuels Hotel, confronted Dahlquist, and shot him as he tried to flee.

Everyone knew Rossi pulled the trigger. But the circumstances – Rossi’s standing at Wallace and his wife’s drinking and adultery – prompted a jury to reach a verdict after meeting just 70 minutes after a week-long trial. Such was the notoriety of the case that a banner headline on the front page of the Spokane Chronicle for October 14, 1916 cried “ROSSI NOT GUILTY OF MURDER”.

Author Roizen lists “The Rossi Murder” among “iconic chapters etched in Wallace’s historic past” – including the mining wars of the 1890s, the great fire of 1910 and the 1991 federal raid “that ended the city’s tradition of prostitution and gambling”. .”

And, for $18 at half a dozen Wallace locations, including Harvest Foods, you can read all about it.

It’s possible that Bruce English still loves pizza and sunflower seeds. And that his pet peeve remains “people who are afraid to do things because of what others might say”. Sixty years ago, the future director of the English Funeral Home was asked to name some of his favorite things in a profile interview by Coeur d’Alene High’s student newspaper, The White Pine. Bruce, then 17, cited math as his favorite class and Chubby Checker as his favorite singer. Additionally, he listed his interests as “working on his car, drag racing, girls, swimming, and water skiing.” He had mapped out his future. After graduating, he planned to attend the University of Idaho. So what? It was off to Minnesota to study the funeral industry.

• Poet’s Corner: If Gas/Keeps Going Up,/I’ll ​​Have To Buy It By The Cup – The Bard of Sherman Avenue (“A Big Regular, Please”)

• Bumpersnicker (on red Suzuki with bobblehead clown on dash, parked on Bolivar Lane): “Bumping for interesting cloud formations.” Now here’s someone stopping and smelling the roses.

• Did you hear how the Kootenai County Rs cheered when Sen. Joe McCarthy was called a “great patriot” for speaking out against Commies Under Every Bush? We’re talking about the local Republicans of 1952 here. But our wacky batch today are probably big “Tail Gunner Joe” fans, too.

• Bumpersnicker (on a van with a mattress topper on Ramsey Road near UPS on Friday): “The welfare of mankind has always been the alibi of tyrants.” (See: Putin, Valdimir)

On this day, 35 years ago, the press announced the formation of what would become Jobs Plus. Area movers and shakers had banded together to raise $1 million over four years to spur job creation, led by Duane Hagadone, Dennis Wheeler, Tom Richards and Charlie Nipp. Wheeler predicted, “It will take three or four years to show results.” Five years later, the success of Jobs Plus was touted by Reader’s Digest. Syndicated columnists Rowland Evans and Robert Novak wrote, “If California is ‘Paradise Lost,’ then ‘Paradise Found’ may be Northern Idaho.” The article goes on to say that “the city of Coeur d’Alene, Idaho…succeeded in recruiting 26 California companies, which created 650 new jobs and an investment of $33 million.” We owe much to the visionaries of the past.

DF Oliveria can be contacted at [email protected]