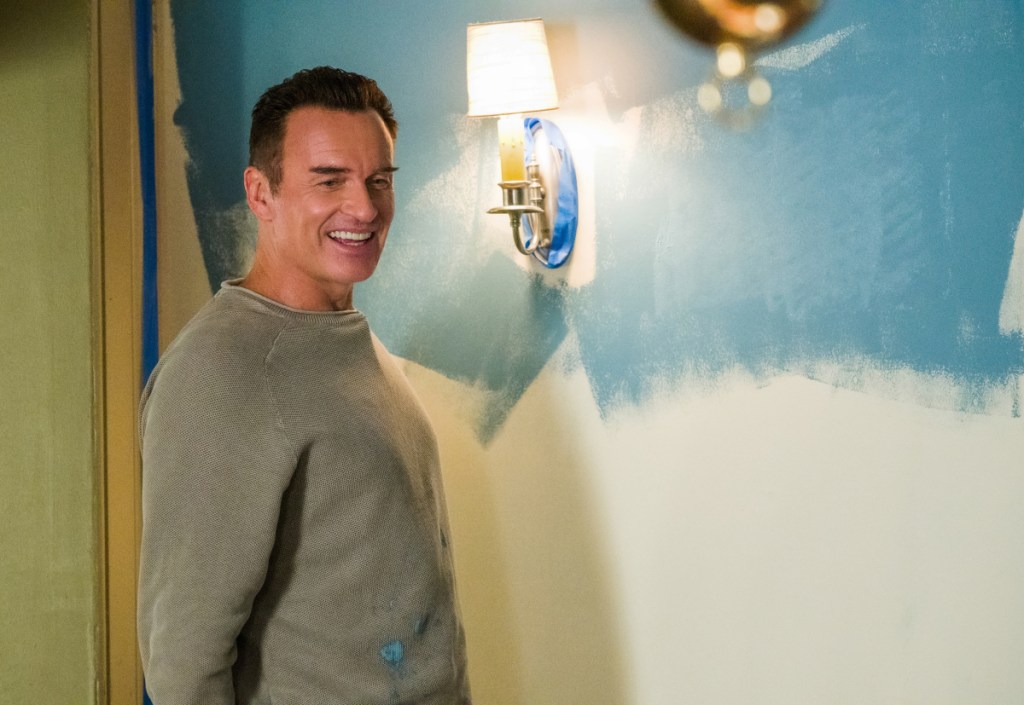 Julian McMahon said goodbye to his FBI: Most Wanted character Jess LaCroix on Tuesday night’s episode of the CBS series, and it was heartbreaking to watch for a multitude of reasons.

In the episode titled “Shattered”, Jess and the team tackle a complicated domestic violence case and are on the trail of the attacker, Harley Ross (Toby Hemingway), and the victim, his girlfriend of longtime Lucy Carver (Kelly Swint).

Unraveling this particular case has been intensive, as the team races against time to beat Harley – who potentially kills anyone with information about Lucy’s whereabouts – from finding her first.

Lucy ran away from Harley with the help of an underground network that uses an elaborate website system to rescue victims of domestic violence. It should be noted that Harley is a known drug addict and cannot be reasoned with.

This case was particularly important to Jess, as his girlfriend Sarah (Jen Landon) was also abused by her ex-husband.

Amid their search, a new clue opens the door wide: Lucy gave birth to Harley’s daughter and never told her about her existence. Harley learns that their daughter Mia exists and is battling cancer, and seconds after Harley meets her in the hospital, Jess and Sheryll Barnes (Roxy Sternberg) interrupt the meeting’s guns.

Cornered, Harley flees and Jess follows him to the parking lot. Jess finds a distressed Lucy hiding between cars and begging for help. Harley emerges through the darkness and fatally shoots Jess, who protects Lucy. Barnes and Ivan Ortiz (Miguel Gomez) bring Harley down, but they’re too late. Jesse is dead.

In the final beats of the episode, a heartbroken Sarah travels with Jess’ father, Byron (Terry O’Quinn) to give Tali (YaYa Gosselin) the heartbreaking news.

DEADLINE: We are all sad to say goodbye to Julian McMahon and Jesse with such finality. How much prep went into the episode, and was killing Jess still the only option?

David Hudgins: As producers, we knew for a while that Julian wanted to pursue other creative activities. So I walked into the room with a writer early on, and we started talking about how Jess would leave the show. We spent a lot of time there, honestly, exploring all the options. Everything was on the table. Ultimately, in the writers room, we kept coming back to this notion that the premise of this show is Most Wanted – we hunt the worst of the worst, the most dangerous of the dangerous. The constant risk of being injured or killed in the performance of one’s duties is inherent in this type of work. And we just decided that, consistent with the premise of the show, that’s what’s going to happen to Jess: he gets killed in the line of duty. But we also wanted to do it in a way where it was heroic, which is why he dies trying to save [Lucy]. It’s shocking, it’s tragic. It’s emotional. It’s dramatic. And that was the best story we could do for the release of this character.

DEADLINE: Did McMahon have any influence on the fate of his character?

HUDGINS: Julian didn’t weigh in. He’s such a pro and such a great guy. He basically told us, “I’m confident you’ll do what’s best for the show.”

DEADLINE: What were the emotions on set when you shot the final moments?

HUDGINS: It was very emotional, as you can imagine, with everyone there, including Julian. We were in a parking lot on Roosevelt Island in New York, in the heart of the city, which is fitting for the death of this character. It was just extremely emotional for everyone, but we all pulled together and did it in a great way.

DEADLINE: Speaking of emotion, can you share a glimpse of that final scene where Sarah and Byron travel to tell Tali that her father is dead?

HUDGINS: There is a version of this episode that could have ended with just the shooting. But as writers, we’ve always been interested in exploring the emotion, the fallout, the grief, and the reality of this moment – which is why you have Barnes and Hana (Keisha Castle Hughes) telling Sarah . They are all so awesome in this scene. And then bringing in Terry O’Quinn so they can tell Tali at the end – what an emotional punch. It’s still not over. We’re going to explore these characters and their grief, the team’s grief and how they deal with his absence over the next two episodes.

DEADLINE: Will the team deal with the events of tonight’s episode for the rest of the season?

HUDGINS: We crafted Jess’ exit so that in the next two episodes we can explore the grief of the team. Isobel (Alana de la Garza) is in the next episode, helping them deal with this grief. The reality is that as FBI agents and professionals, they have a job to do, but they are also human. They cry and they have emotions. So we decided to take all of that and throw it into the mix. So over the next two episodes, we see the team deal with the case of the week, but also each other and their grief and loss and everyone deals with it differently. And it just makes for a good story.

DEADLINE: When will we meet Dylan McDermott’s new character? What can you tease on that front?

HUDGINS: He arrives in the April 12 episode. We’re trying to keep some of this a secret for now. What I can share is when we decided to make this move, not only were we determining Jess’ exit, but also the new character’s entry. We started creating the character, coming up with a broad stroke and sketches of that person. During this process, we learned that Dylan was available and potentially castable. When it was on full blast, we were thrilled because it fit perfectly with what we wanted to do and where we wanted to take the show. It’s invigorating.

We see this as an opportunity, like sort of closing a chapter and starting a new one with Dylan now in charge. I think it’s going to be really exciting and really fun for the fans. It’s always going to be about the manhunt and getting justice – that’s the heart of the show. But seeing this new iteration of the team do it this way with Dylan on board is very exciting. We have, essentially, a six-episode arc that we’re shooting for his character to take us to this year’s finale.

DEADLINE: Will he feel like he has big shoes to fill?

HUDGINS: I think so because he does. The Fugitive Task Force is the FBI’s elite team. You don’t get this job if you don’t know what you’re doing. And that’s part of the story, too, because suspended in the ether in those two episodes before Dylan came along, is this idea of ​​who [the new boss] will be?

DEADLINE: Can viewers expect to see friction between Dylan and the Task Force?

HUDGINS: Yes, there are frictions. It’s only natural to mourn the loss of someone. In Jess’ absence, you watch where he used to make his tea and put his little teddy bear or whatever. It’s emotional. There’s going to be friction and this lingering question of how are we going to do this and how can we do this? And finally, I think it will bring the team together.