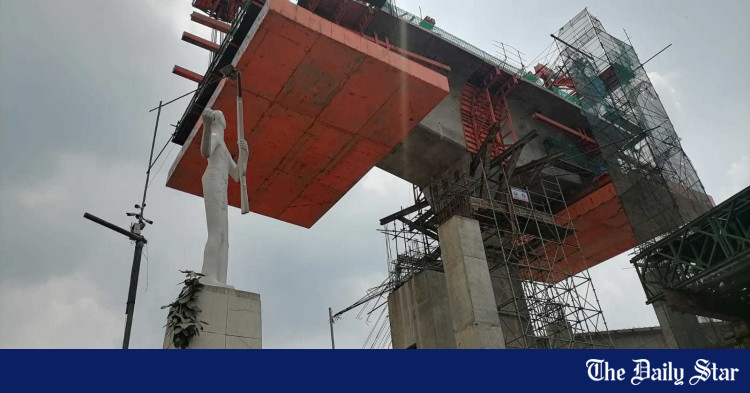 security at the project site, but they failed to do so, resulting in the deaths of five people last month.

For all the latest news, follow the Daily Star’s Google News channel.

If so, what is the rationale for these allocations and expenses? Why couldn’t security be provided even after the money was spent for this purpose?

These are the two vital issues that the Planning Commission raised after the project authorities requested the review of the long-delayed project for the third time.

Although the commission questioned the role of the project authorities, an investigative body, formed by the Ministry of Road Transport and Bridges, said it found no fault on the part of the authorities for the incident which killed five on August 15.

The committee, headed by Neelima Akhter, deputy secretary of the Road Transport and Highways Division overseeing the project, held the Chinese contractor for the project responsible.

In his final report submitted to the roads secretary on Thursday, he said project authorities needed to step up round-the-clock surveillance to ensure security at the project site.

Authorities need to see if the consultants are performing their duties properly, he said.

ABM Amin Ullah Nuri, Division Secretary, revealed the findings of the seven-member Investigation Committee during a press conference at the Secretariat yesterday.

A government agency usually does not make these investigative reports public.

The committee, however, did not recommend any sanctions for the contractor, but the secretary said the enforcement authority, the Roads and Highways Department (RHD), will take action in accordance with the contract.

Five people, including two children, were crushed to death on August 15 when a crane overturned, knocking a box girder segment onto their car on the Dhaka-Mymensingh highway in the Uttara region of the capital.

The project was launched in November 2012 to construct a 20.50 km dedicated bus service route between Hazrat Shahjalal International Airport and Gazipur.

It was expected to be completed at a cost of Tk 2,037.85 crore by December 2016. But the deadline was extended several times and the cost eventually amounted to Tk 4,268.38 crore.

According to the latest deadline, the project should be completed by December this year.

However, the project authorities have recently requested a third revision of the project to extend the time for its implementation to December 2023 and have made some changes to the internal allocation of the project without any increase in the total cost.

In response to the proposal, the Planning Commission sent a letter with some comments to those responsible for the project. He will hold a meeting on September 8 to discuss the matter.

In its submission, the commission said: ‘A proposal has been tabled to extend the deadline to December 2023, meaning the four-year project would take 11 years.’

It asked the authorities concerned to justify this delay.

According to the commission document, Tk 5.57 crore was allocated for “maintenance and traffic protection” under the “general and site facilities” component.

But a tragic incident took place recently as proper security measures were not in place at the project site, it reads.

“In this situation, the [September 8] meeting should discuss allowance and expenses. Also, it should be clarified at the meeting why security could not be provided even after the money was spent for this purpose,” he added.

When contacted, ASM Project Director Elias Shah said they were preparing answers to questions posed by the Planning Commission and would place them at the meeting.

However, he did not give details.

A day after the incident, the investigation committee submitted its preliminary report accusing the Chinese contractor – China Gezhouba Group Co Ltd – its safety team and the crane operator of negligence that led to the accident.

Referring to the final report, the Roads Secretary said yesterday the committee had found 12 reasons behind the incident – the first being that the contractor carried out work on the National Day of Mourning, a day public holiday, without any approval.

Amin Ullah further stated that it was the first time a beam segment was carried during the day, but the reason behind this is unclear.

He said the crane was operated by an assistant and the operator had no license or digital monitor. The contractor did not have a traffic management plan or an emergency management plan, he added.

The people involved in the work of the contractor at that time had no approval. In addition, the security engineer assigned did not have the capacity to do the job, he added.

The contractor is primarily responsible for the incident which took place due to a breach in the security mechanism, he said, adding that “they [contractor] could have done it to save money.”

He said the consultancy firm, Engineering, Procurement and Construction Management (EPCM), had sent the contractor 34 letters regarding safety breaches since January 11 this year.

But the consultancy should have visited the project site regularly and properly monitored the works, as sending letters is not enough to ensure safety compliance, he said.

In response to a question, he said that the project authorities are not responsible for the particular incident, but they need to reinforce round-the-clock surveillance to ensure security at the project site.

He also said the committee did not recommend any punitive measures.

The secretary said the committee made 14 recommendations to prevent the recurrence of such an incident. One is for the Chinese Embassy in Dhaka to be informed that the contractor has repeatedly violated the rules regarding security measures.

He also recommended compensating the families of the victims in accordance with the contract and only continuing the project after providing security.

2022-09-04
Previous Post: King Air Plane Down Pilot In Custody After Threatening Walmart (Update)
Next Post: Sanjana Ganesan shuts down the troll who posted a nasty comment on her photo with Bumrah