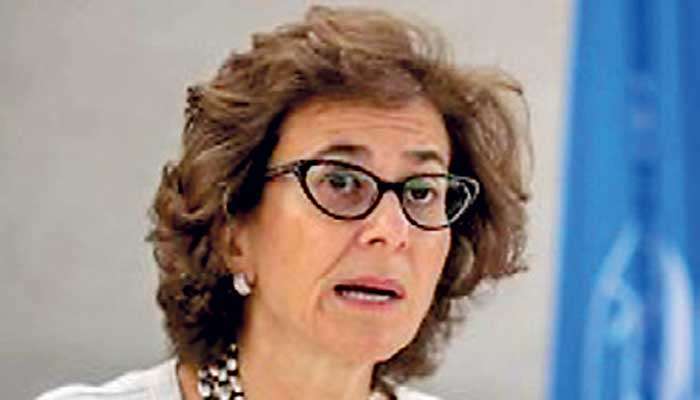 Sri Lanka dresses up at the HRC

Acting UN High Commissioner for Human Rights Nada Al-Nashif has urged the Sri Lankan government not to revert to its reliance on draconian security laws, but to take action to foster an environment conducive to peaceful protest, critical discussion and debate.

Presenting the report of the United Nations Human Rights Office on Sri Lanka before the 51st session of the Human Rights Council in Geneva, Al-Nashif said that although Sri Lanka has gone through the recent political changes largely peaceful, the situation in Sri Lanka is still fragile.

The Acting High Commissioner said it was worrying that in recent weeks dozens of leaders and members of the protest movement and trade unions had been arrested.

“The use of the Prevention of Terrorism Act to arrest three student leaders on August 18, 2022 is particularly troubling, despite the government’s announcement in June 2022 that it is enforcing a de facto moratorium on the use of this law. since March of this year,” she said.

“I urge the government not to revert to this reliance on draconian security laws, but to take positive steps to foster an environment conducive to peaceful protest, critical discussion and debate,” he said. she adds.

Commenting on the government’s plans on drafting a new anti-terrorism law to replace the law on the prevention of terrorism, in the area of ​​transitional justice as well as institution building, Al-Nashif noted that the reforms of the security aimed at dismissing military officials or former paramilitary leaders implicated in past human rights violations, it was imperative to increase transparency and ensure accountability to keep those promises.

She also said that the continued surveillance and intimidation of civil society organisations, victims’ groups, human rights defenders, journalists and former LTTE cadres by government agencies is of concern.

She pointed out that Sri Lanka has repeatedly failed to pursue an effective transitional justice process and uphold victims’ rights to truth, justice and reparations.

“Rather, as described in our previous reports, successive governments have created political barriers to accountability, actively promoted and integrated some military and former paramilitary officials credibly implicated in alleged war crimes at the highest levels of government, and failed to present a common understanding. of the conflict and its root causes,” she noted.

Al-Nashim also stressed that no progress has been made on the 2019 Easter Sunday attack. particularly the role of the security establishment, in a process that ensures the full participation of victims and their representatives,” she said.

Impunity, Al-Nashim said, remains a major obstacle to the rule of law, reconciliation and sustainable peace and development in Sri Lanka. “This impunity continues to embolden those who commit human rights violations, has created fertile ground for corruption and abuse of power, while contributing to the current economic crisis,” she noted.

However, she also said that the HRC welcomes the government’s commitment to providing social protection to the most vulnerable. She also said that the organization encourages member states and international financial institutions to ensure that Sri Lanka has the fiscal space to meet its basic economic and social rights obligations in this regard.

The Acting High Commissioner said that the Government now had a new opportunity to steer the country on the path to justice and reconciliation and to address the legacies of the conflict. In this respect, she welcomed the tone given by the President during his first speech to Parliament in which he recognized the diversity of the Sri Lankan nation and promised constitutional reforms. (MB)