[Update: Alexa down or not working] Amazon and AWS down and not working for many

Just in case you’re trying to figure out why Amazon or AWS (Amazon Web Services) isn’t working for you, take comfort in the fact that you’re not the only one experiencing issues lately.

A quick look at the micro-blogging site Twitter indicates that there are plenty of other people affected by the same problem. For a quick look, here’s how some of the complainants frame the issue:

a little weird…. Amazon and AWS are both down…
The source

Wow, #amazon is down in Canada and the US, hope they don’t use AWS LOL
The source

Outage Detector – a popular service that provides live outage information – also indicates that AWS and Amazon are indeed going through an issue, as can be seen in the image below:

Any official word on the subject? Negative, so far. We have yet to locate a word of official service channels or their social media handles. AWS Service Health Dashboard, however, is not reporting any service outages at this time.

Rest assured that we keep a continuous tab on all related developments and will update this page with relevant information as we come across it. So if you encounter the problem described here, stay tuned for updates.

08:47 (IST): Amazon Support has confirmed that they are aware of the issue and that the team is working on it.

Be informed, we are aware of the problem and our team is working on it. (Source)

9:38 a.m. (IST): The issues have been resolved according to the company’s support team on Twitter.

We have checked and found that the issue is resolved. Let us know if you need further assistance. (Source)

A few users have also confirmed that the service works for them.

Yes, it is resolved. (Source)

5:35 p.m. (IST): This morning Amazon and AWS went down for many in the US, Canada and the UK. Although Amazon was able to resolve the issue in time, it appears to have resurfaced.

Downdetector says service is not running once again in some areas as can be seen on the map below. 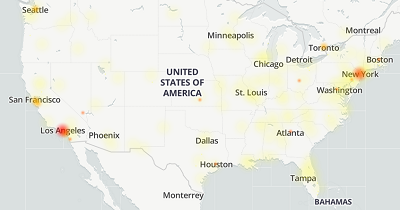 It looks like the issue has now been resolved as we no longer see any complaints on social media platforms like Twitter. Even Down Detector does not show any user report or failure. So it’s safe to say that the problem has probably been solved.

A representative from the AWS Public Relations team contacted us to say that AWS did not experience any outages on the day the Amazon website was down. In their own words:

AWS actually didn’t have any disruptions yesterday when Amazon.com was down

In response, we have shared with them our basis for highlighting the AWS outage and are awaiting further details from them. If and when we receive a response, this article will be updated accordingly.

STI 22:00 – Looks like Amazon is down again plus other popular services, like UPS and HBO Max. At this time, it’s hard to say what the reason and extent of this outage is, but we’ll keep an eye out and update this story as we come across anything interesting.

STI 22:15 – It’s hard to say if this is related, but Akamai, a popular content delivery network provider, has confirmed that their service is currently experiencing a major outage.

Investigation – We are aware of an emerging issue with the Edge DNS service.

We are actively investigating the issue. If you have any questions or experience any impact due to this issue, please contact Akamai Technical Support. In the interest of time, we provide you with the most recent information available, which is subject to changes, corrections and updates.
July 22, 16:09 UTC

STI 22:25 – Akamai has provided the following information about Twitter:

We have implemented a fix for this issue and based on current observations, the service is back to normal operations. We will continue to monitor to ensure the impact has been fully mitigated.

STI 13:36 – The issue indeed appears to have been resolved as there are no signs of any AWS or Amazon related outage anywhere in the world. Downdetect confirms the same:

STI 11:09 – Amazon and AWS are experiencing an outage again. Many users have a habit of reporting that the service is not available and Downdetector also shows a large spike in reports that both services are not working.

STI 11:57 – A flurry of new reports are circulating on social media platforms, reports that indicate Amazon is down. According to these users, they face an error message “Sorry, something went wrong, we are working to fix it.” It seems that the problem only affects iOS users.

Downdetector is also seeing a lot of new reports and a spike in user feedback on outages.

We will continue to keep an eye on these and update them as we have more information, so stay tuned to PiunikaWeb.

IST 08:40 (IST) – It seems that many people with iOS devices still have a problem with the Amazon app, because reports on Twitter continue to accumulate. Additionally, Downdetector also points to a widespread issue with Amazon.

IST 12:16 (IST) – A section of Amazon users reportedly facing an issue where the app keeps crashing with error CS11.

We ask you to download the latest version from the app store, clear cache, enable permissions for the app in settings and also enable automatic time and date update. (Source)

IST 11:52 (IST) Now reports are coming in that Amazon is down. This, according to Twitter reports.

Downdetector also shows a sharp increase in outage reports over the past few hours.

IST 08:40 (IST) Several hours ago, Amazon’s servers were down, causing many services to be disrupted, including Disney Plus, Alexa, and Ring, as reported by The Verge.

In the latest status update on the subject, Amazon confirmed that many services have already recovered and network device issues have been resolved. Currently, the company is working on recovering the remaining impaired services.

IST 13:17 (IST) New reports indicate that many Alexa users in various regions are unable to use Amazon’s smart assistant as it has suddenly stopped working.

My @alexa99 is down this morning. Can’t turn on my lights. I’m so glad I didn’t buy the Alexa coffee machine, otherwise I’d be a mess. #Sorry, something went wrong (Source)

Yes, it looks like Alexa has a global #alexaDown issue (Source)

@amazon Alexa is down. Given that Amazon runs a plethora of services with @awscloud, that’s not good publicity for itself. (Source)

We don’t have any official word on that yet. That said, stay tuned for more details.

2022-01-21
Previous Post: Court Enforces TCPA and Cruise Line Arbitration Disclosures Despite Objection – TCPAWorld
Next Post: A man visits a restaurant in the middle of the snowfall and falls to his knees when he sees that it is closed | Tendency