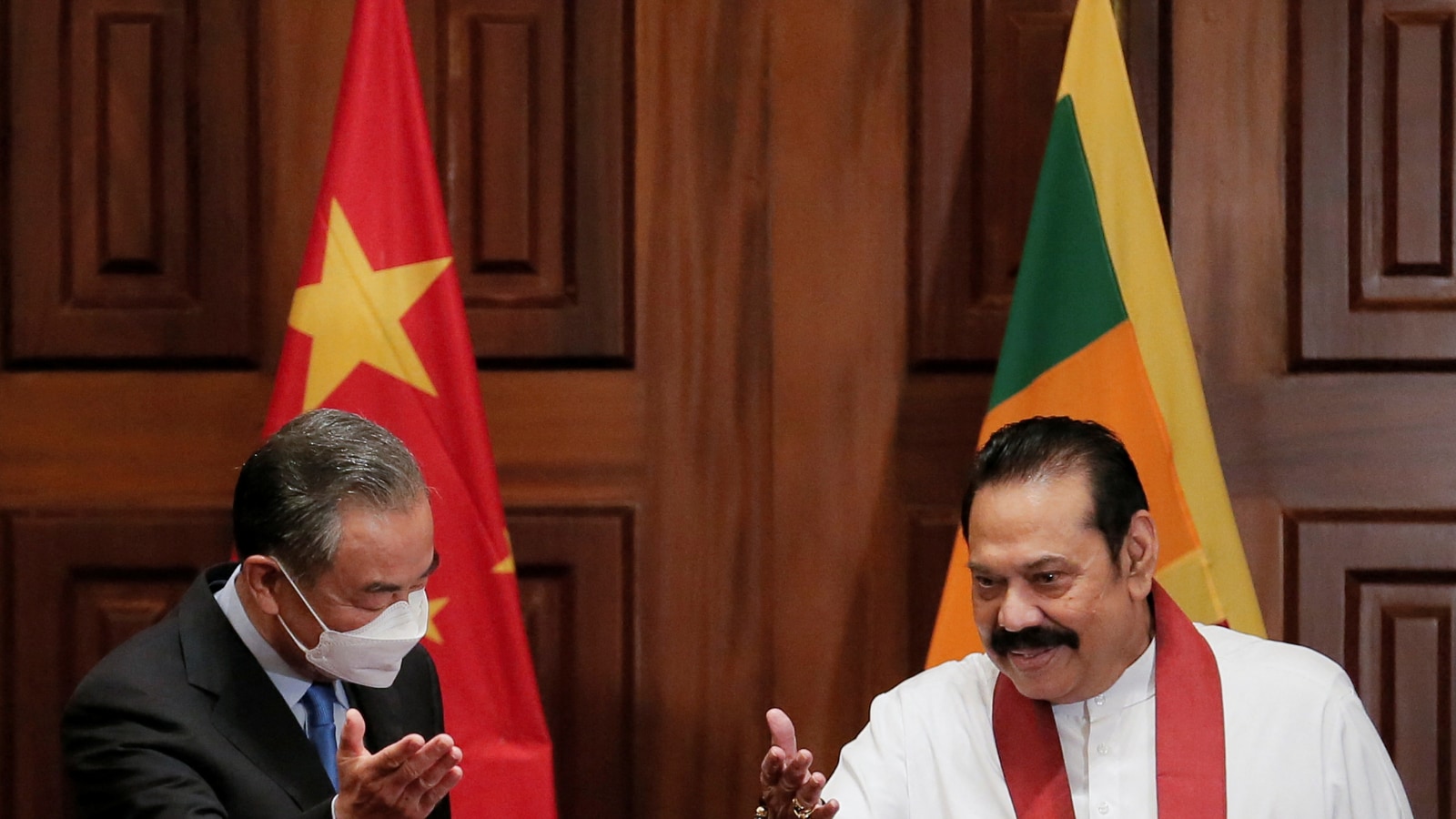 Why China gets special treatment in Sri Lanka

From what is recorded, Chinese Foreign Minister Wang Yi’s two-day visit to Sri Lanka did not cause additional concern, especially for the Indian neighbor. Unlike in the past, the local media also downplayed it from top to bottom. A day after his visit, many English-language newspapers in Colombo, euphemistically referred to as the “national media,” instead explained how the crippling forex crisis had hit the domestic electricity supply too hard, depending on whether the nation depended on imported oil and coal to burn its thermal power plants.

Sri Lankan President Gotabaya Rajapaksa, according to early media reports, urged the visitor and his team to restructure the money the island nation owes them. This is a pragmatic request even without the forex crisis, given the global COVID conditions of the past year and more. Wang Yi also met with Prime Minister Mahinda Rajapaksa, who is the non-executive leader acting under the president, his brother. With the latter, the visitor mainly discussed future cooperative efforts, for which decisions rested with the President and the Cabinet as a whole.

All in all, Wang Yi’s visit went off without incident, one way or another, at least until one or more skeletons fell out of the closet.

Spirit of the RR Pact

During Wang Yi’s visit to Colombo, the two sides also discussed how far they have come together in the past 65 years of diplomatic cooperation. Significantly, bilateral economic cooperation had started six years earlier, in 1951-1952, with the two parties signing the “Rice Against Rubber Pact” and immediately implementing it in the aftermath of the food crisis in Sri Lanka, then in Ceylon.

As part of this program, Mao’s China, still settling after taking power in 1949, supplied drought-stricken Ceylon with rice at below-market prices and bought rubber. , the island nation’s only exportable product at the time, at prices above international prices. It should have shown the world adversaries of the nascent Communist nation how deep and far-sighted the New Masters were. Some of China’s much-loved strategic thinking and economic leverage ideas may have started there.

India, by comparison, was itself reeling from economic pressures resulting from the years of accompanying drought and post-independence, post-partition social and developmental woes. He had no rice to offer Ceylon. While the Sri Lankans do not complain about India at this time, they certainly have not forgotten the “grace and generosity” of China, which makes it as reliable an ally as India, the country of India. good neighborhood.

As some Sri Lankan strategic thinkers point out, during the RR Pact era, China had no global ambitions, its place even in the immediate Asian context was unknown, as was the future of Communist China. So, according to the argument, there was no strategic intent in what China did for its nation at the time. It was, plain and simple, humanitarian aid, which the rest of the world began to hear a lot about over the following years.

It is now a given in Colombo that China would respond positively to President Gotabaya’s request for debt restructuring. Beijing has been doing this for other borrowing countries since the COVID pandemic began to cripple their economies as well. Therefore, the question arises as to whether the two sides discussed medium and long term economic cooperation plans that could pull the Sri Lankan economy out of the mess it finds itself in.

For India and the world, the price Colombo will have to pay and will be willing to pay for China’s last-minute aid would be as interesting and worrying as the scale of additional Chinese aid, if any. Friends of Sri Lanka other than China will also want to know where this money would go and how it would be spent.

The reasons are not far to seek. Over the past decade, the massive investment in Chinese debt has not created a single job for a Sri Lankan, nor has it put money in the pocket of any Sri Lankan entrepreneur or supplier (at except politicians, if applicable). The Chinese brought their men and equipment to do their work, no questions asked, no murmurs of protest.

If only politicians, including the perennial opposition within the leftist party Janatha Vimukthi Peramuna (JVP), had protested as much as they had on other occasions, especially when it came to investments Indians, Americans and others, they could have saved their nation from this sad day. People waiting in long lines for powdered (imported) milk in what is essentially an agrarian economy would not have to boo at President Gotabaya as his motorcade passed through the capital Colombo, though only they had protested against Chinese investments.

Regardless of China’s white elephant plans, there was always the element of jobless growth even when there was growth, driven by massive Chinese credit, especially under the government of President Mahinda Rajpaksa (2005-2015). Much of the current crisis in economic terms could be explained in this way. Although China is the fourth largest lender / investor in Sri Lanka, after Japan the concept of not creating jobs for locals and putting money in their pockets has dried up those pockets during this pandemic even as creditors queue up long, demanding repayment when due.

In contrast, anything Indian in terms of aid and assistance is the subject of instant protests. Although India signed its first Free Trade Agreement (FTA) with Sri Lanka in the late 1990s, its timely upgrade has remained a daunting task. The previous Rajapaksa era initialed the Memorandum of Understanding for a Comprehensive Economic Partnership Agreement (CEPA) after bilateral negotiations for years, but just before Prime Minister Manmohan Singh’s visit to Sri Lanka in 2008, public protesters are mysteriously appeared in the streets of Colombo, delaying it indefinitely.

Sri Lanka’s successor to Prime Minister Ranil Wickremesinghe dropped out of CEPA in 2015, but pledged another deal in his stead. But until he stepped down in 2019, his government was negotiating what would come to be known as ETCA, or Agreement for Economic and Technological Cooperation (ETCA). It is yet another forgotten page in bilateral economic relations.

As Prime Minister, Ranil spearheaded the conversion of the Hambantota construction contract, inherited from the Mahinda regime, into a lease in favor of China. Ahead of the 2015 poll, he unilaterally said he would shut down Chinese-funded Colombo Port City (CPC) as if to please neighbor India as well as its US-led Western allies. After coming to power, when the current Gotabaya regime piloted the CPC management bill in parliament last year, Ranil’s party and the separatist Samagi Jana Balawegaya (SJB) party reaffirmed that they were all in favor of the project and only had problems with the Gotabaya project.

Now comes the most recent of all. During the week of Chinese Wang Yi’s visit to Colombo, India and Sri Lanka signed the much-delayed agreement on the cooperative use of WWII-era oil tank farms in the is from Trincomalee. Contrary to what Colombo promised to the Indian group Adani during the sale of the majority stakes in the Western Container Terminal (WCT) of the port of Colombo, as part of the Trinco agreement, they speak of maintaining the majority stakes in Sri Lanka at 51:49.

Needless to refer to the interim ECT agreement, for which the Wickremesinghe government only signed a memorandum of understanding with India and Japan and which the current Gotabaya regime has abandoned, citing the (fabricated) protests ?) worker and Buddhist monks. The unions protested some time ago when the Trinco agreement was on the anvil. A Buddhist organization, the Bhikkhu Front, has since taken action to the Supreme Court, challenging the Trinco agreement.

Against this backdrop, it remains to be seen how the Trinco deal will take shape on the ground, especially after Indian funding to meet Sri Lanka’s immediate foreign exchange needs hits its mark and also dried up. Will there be a resumption of union protests, or a discouraged government defense of the deal in the Supreme Court, or both – whether or not it is China, as is often suspected in India, but this is not always the case – as a course would still please Beijing.

The author is Distinguished Fellow and Head-Chennai Initiative, Observer Research Foundation, India’s multidisciplinary public policy think tank, headquartered in New Delhi. The views expressed in this article and those of the author do not represent the position of this publication.

Read all the latest news, breaking news and news on the coronavirus here.

2022-01-10
Previous Post: BC Curling Championships Day 5: through to the last four | Curl BC
Next Post: The layout of the V60 HOUSE promotes relaxation and reconnection with the family